We have inalienable fundamental rights as human beings. The most important and key being “the Right to live”. When this is threatened the citizenry look to its leadership “The General” for protection and cover.

Even the “chick” understands this and that is why a hen would protect its eggs and chicks , so why then does our Nation seem to crumble?, do we not have efficient Generals or have they lost their way? read this and Decide for yourself

” The Authority of the Leadership

If the general can hold the authority of the country and operate its power, he oversees his subordinates like a fierce tiger with wings, flying over the four seas, going into action whenever there is an encounter. If the general loses his authority and cannot control the power, he is like a dragon cast into a lake, he may seek the freedom of the high sea, but how can he get there?

There are five types of harm in decadence among national armed forces. First is the formation of factions that band together for character assassination, criticizing an vilifying the wise and the good. Second luxury is in the uniform. Third is  wild tales and confabulations about the supernatural. Fourth is judgment based on private views, mobilizing groups for personal reasons. Fifth is making secret alliances with enemies, watching for where the advantage may lie. People like this are treacherous and immoral. You should distance yourself from them and not associate with them.

Nothing is harder to see into people’s natures. Though good and bad are different, their conditions and appearances are not always uniform. There are some people who are nice enough but steal. Some people are outwardly respectful while inwardly making fools of everyone. Some people are brave on the outside yet cowardly on the inside. Some people do their best but are not loyal. Hard though it be to know people, there are ways. First is to question them concerning right and wrong, to observe their ideas. Second is to exhaust all their arguments, to see how they change. Third is to consult with them about strategy, to see how perceptive they are. Fourth is to announce that there is trouble, to see how brave they are. Fifth is to present them with the prospect of gain, to see how modest they are. Sixth is to give them a task to do within a specific time, to see how trustworthy they are.

There are eight kinds of decadence in generalship. First is to be insatiably greedy. Second is to be jealous and envious of the wise and able. Third is to believe slanders and make friends with the treacherous. Fourth is to assess others without assessing oneself. Fifth is to be hesitant and indecisive. Sixth is to be heavily addicted to wine and sex. Seventh is to be a malicious liar with a cowardly heart. Eighth is to talk wildly, without courtesy.

1. Desire for the extraordinary and unexpected in strategy,2. Desire for thoroughness in security, 3. Desire for calm among the masses, 4. And desire for unity of hearts and minds.

Military preparedness is the greatest task of the nation. A small mistake can make a huge difference. When the force of momentum by which soldiers are killed and generals are captured can move with sudden rapidity, should we not be wary?

Therefore when a nation is in trouble, the ruler and ministers urgently work on strategy, selecting the wise and assessing the able to delegate responsibility to them.

If you count on safety and do not think of danger, if you do not know enough to be wary when enemies arrive, this is called a sparrow nesting on a tent, a fish swimming in a cauldron – they won’t last the day.

“Preparedness against the unexpected is a way of good government.”

“Even bees have venom – how much the more do nations. If you are unprepared, even if there are many of you, mere numbers cannot be counted on.”
A classic document says, “Only when we do our tasks are we prepared; when we are prepared, there is no trouble.” Therefore the action of the military forces must have preparation.””

Good generals of ancient times had some overall principles:

1. Show people when to proceed and when to withdraw, and people will learn regulation.

2. Array them on the lines rightly and justly, and people will be orderly.

3. Show respect for them by your judgment, and people will be enthusiastic.

4. Motivate them with rewards and penalties, and people will be trusting. Regulation, order, enthusiasm, and trust are the overall principles of generals, by which they are able to ensure victory in battle.

like Catelyn Stark say’s: “He won’t be a boy forever. And, winter is coming. “… 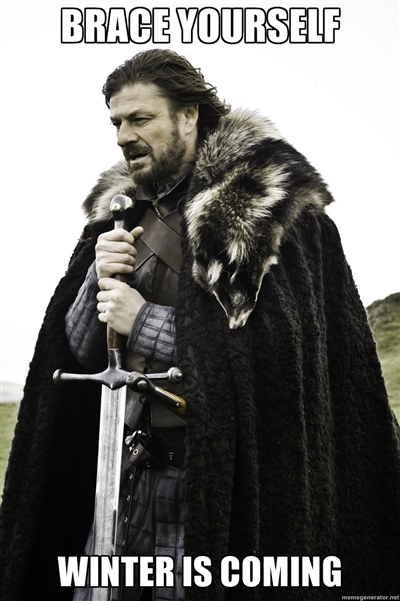 It is time to wake Up as a nation and realize that the violence is not so far away for:

“To every man there comes in his lifetime that special moment when he is figuratively tapped on the shoulder and offered a chance to do a very special thing, unique to him and fitted to his talents. What a tragedy if that moment finds him unprepared or unqualified for the work which would be his finest hour.”
–Winston Churchill

2 thoughts on “The way Of The General”